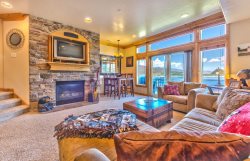 Priorities: Hot Tub, Ski and Lake? Stay at the closest rentals to Snowbasin
6/6/2016

Early snow helped, but there's little doubt the "Vail effect" played a significant role in boosting Utah's ski industry to record visitation during the 2015-16 season — by a sizable margin.

That total also was 12.9 percent better than the preceding, weak-snow winter, Ski Utah President and CEO Nathan Rafferty said Thursday, but more impressively was 10.4 percent above the five-year average of 4,037,349.

To Rafferty, one of the most encouraging aspects of this record is that it was set in a winter of mediocre snowfall.

Alta Ski Area, which always logs the highest snowfall total, measured 438.5 inches. In 2007-08, it received 701.5 inches, while neighboring Snowbird stayed open through the Fourth of July.

But some of that snow came early, magnifying the buzz surrounding Vail's creation of Park City Resort, the largest resort in the United States after the connection of Park City and Canyons was completed in December.

And with Vail's acquisition of Midwestern ski resorts outside of Chicago and Milwaukee expanding its base of Epic Pass holders, more skiers from around the globe had reason to consider a visit to Utah.

"People said, 'I gotta check that out,' " Rafferty said, noting that other Wasatch Front resorts also benefited from the spillover of outsiders coming to Park City. "One of the best things we have in this state is variety."

Variety is also a trademark of this season's other big change — the move of Deer Valley into Big Cottonwood Canyon with its preseason acquisition of Solitude Mountain Resort.

"This was a historic season," said spokeswoman Margo Van Ness. "Unveiling the new Quicksilver Gondola that physically connected the resort in its entirety and brought the new mountain to life was a special moment."

"All the capital projects that debuted this season helped to transform the guest experience and provide a new one-resort reality," she added.

Sundance Resort was one of those resorts to sell a record number of lift tickets, said spokeswoman Annie Davis, noting that at times the Provo Canyon ski area was "bursting at the seams."

Instead of having to turn away 20 or so vehicles per year from its small parking lots, she noted, more than 1,000 vehicles had nowhere to park this winter.

Up north at Powder Mountain, resort spokesman J.P. Goulet said visitation was up 29 percent this winter, which he termed "massive."

He felt the Ogden Valley resort received spin-off visitation from people initially lured to Park City or Salt Lake City — "If we can capture those people for just one day," he mused. But Goulet also is convinced "the word is getting out about Ogden. People realize there aren't big crowds here and that it's cheaper to ride and rent a place."

"We definitely saw more pedestrian traffic on 25th Street, and our restaurants were up," she said.

Utah Lodging is happy to announce that they will be partnering with All Action Sports as the official lodging partner for the Tige Wake Up, June 29 - 30, and the Rocky Mountain Surf Open August 12 - 14!

These action packed events offer the perfect opportunity to spectate, enjoy the sun, or enter the competition. For more information on registering, go to http://www.rockymountainwakesurfopen.com or https://wakeutah.com !